How to Repair Soldering Iron Not Heating?

Today in this article we are going to learn how to repair soldering iron not heating. It is very easy to repair a Soldering Iron. A soldering Iron has a Heating Element and a Control Circuit for Adjusting the Temperature. So, we will Discuss In Detail how we can repair all this thing.

Here is the video about how to repair the soldering iron heating element on YouTube and you will understand everything.

What Actually Happened in my soldering Iron and why was soldering iron not heating?

One I was working on a project where I have to solder a PCB. But that time a sudden sound came from the soldering iron. After that, the RED Indicator LED of the Soldering Iron has stropped working. I checked the Tip Temperature was not Increasing. So, I basically found that there is some kind of defect happened in the soldering Iron, as a result, I had to repair It to continue my Working Project.

So, This is what actually happened.

Here you can see all the components from the soldering Iron. Here You can also see a Physically Damaged IC. This must be a Triac for voltage regulation. The circuit is like an LED Dimmer Circuit which I have made previously.

Then I removed the SMD Triac with a Hot Air Gun. If you don’t have this then you can also use another soldering Iron. for removing the Triac.

Here you can see it is written BT134. It is a Triac. So, My assumption was correct. This is an SMD Component. In my local market, only THT components were available, SMD was not available. When I saw some datasheets then I find that BT136 is better than BT134. By the way, BT136 is widely available in the market at very cheap.

Then I soldered the BT136 and put it to in its Enclosure. and finally, the soldering iron is ready to use. 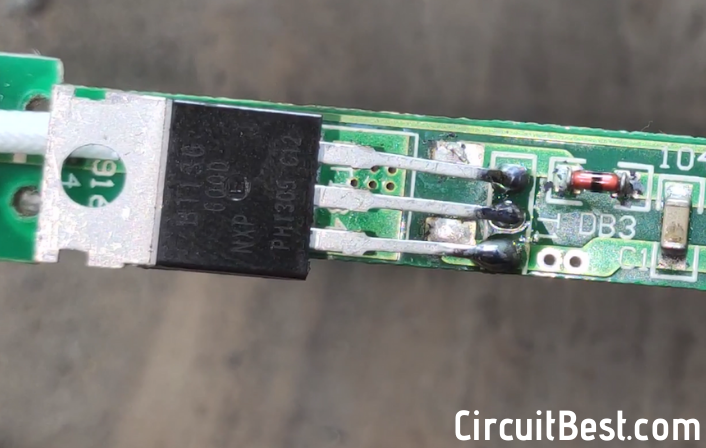